As far as Diver’s Watches are concerned, few are as iconic, reliable, and reasonable as the Zodiac Seawolf. Once an incredibly innovative and highly regarded brand, they like many others hit hard times as quartz killed the middle market for timepieces.  The company changed hands a few times and is currently owned by Fossil. Although positioned as somewhat of a luxury arm of Fossil Watches they have lost some of the Swiss elegance, clean designs, and craftsmanship that they were once known for.

I have a love/hate relationship with the movement in these pieces. These movements were the product of a joint development between Girard Perregaux, Eberhard, and Doxa among others (as I said before, a once innovative and highly regarded brand.) No matter what condition I get these in, a trip through the cleaner and they have an amazing sparkle and finish that you cannot help but be mesmerized by. They are also incredibly robust, which is one of the reasons they became famous as the choice of watch for Navy SEALs (as legend has it.)

On the hate side this movement has a few peculiarities that can make it incredibly frustrating to work with. It has something called an offset cannon pinion. The cannon pinion is the piece that transfers motion from the wheels below to drive gears up top and thus the hands. While there are other movements that have offset cannon pinions few have the number of problems I have seen with these. Since this is a two-piece mechanism the most common problem is a total loss of friction between the components. This leads to the unbelievably annoying problem that the mechanism works perfectly, but the minute and hour hands wont advance. Due to this, these watches require an extra step of mounting a minute hand before setting the dial just to make sure that the thing advances. Another downside is that this part isn’t made anymore, making it crucial that any adjustment is done incredibly carefully. Not to say that any adjustment with any part is ever done without delicacy, but the added pressure is somewhat annoying. It also has a case back that is damn near impossible to get open.

Once together though this piece is great and has a few functions that set it apart from other similar watches. Firstly this watch has a hack function, meaning that when you pull the crown to set the time the second hand stops for precision time setting. Secondly, it is equipped with a quickset date function allowing the date wheel to turn by simply depressing the crown. Although this causes the crown to jut out a touch more than usual, I prefer that to the winding and winding and winding sometimes required to synchronize the date.

The light blue bezel on the white dial is a great look and a fantastic representation of the clean designs of old-school Zodiacs, as are their particular hands. Other than the few marks on the dial, it is in great shape. All finished, this is a unique and wonderfully made vintage diver’s watch. 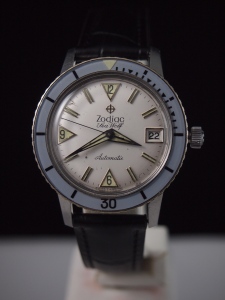 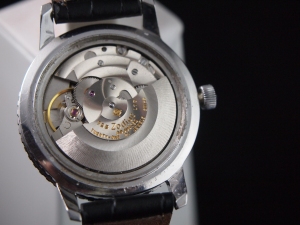