Sometimes innovations do not succeed simply because they are ahead of their time. The Tissot 2250 is a great example of an innovation that was sabotaged due to poor marketing and timing. It came out right as Quartz was killing the middle and lower markets. Most of the technologically advanced pieces killed by quartz that I have written about to date dealt with transitional integration of electronics into timepieces. This watch used polymer technology to overcome one of the most long-standing and unavoidable problems of mechanical watches: lubrication. Also referred to as the SYTAL (Systeme Total d’Autolubrification) it was designed to never need to be oiled. This was as much of a benefit to watchmakers as it was to consumers. Not only is oiling a watch crucial to its proper function, but as with any task that requires a huge amount of diligence and care, some people look to take shortcuts or genuinely don’t care, and invariably screw it up. I cannot tell you how many watches I have opened up to find literally doused with oil, have oil where it shouldn’t be, or where the oil is improperly applied.

Taken out of its historical context, this is a fantastic piece of mechanical innovation, the likes of which would not reappear until just recently with the Swatch Sisteme51. This new innovation (soon to be reviewed here) is the first mechanical watch to be assembled entirely by machine. Additionally it is claimed that it will run for 20 years without need for service. Forgive my skepticism, but this is the same industry that has brought us the “Lifetime Mainspring” which as any watchmaker knows is one of the least true statements in watchmaking history. While somewhat cynical on claims based off of these types of innovations, this Tissot restores some of my faith in the next generation of technology as after more than 30 years it is still running strong and accurately which Is more than I can say about many of the quartz movements of the time that have crossed my bench.

I feel that there are two major problems with this watch, both of which are a result of the plastic construction. There is virtually no weight to the watch making it feel insignificant on the wrist. It is a hard sensation to describe, but it is similar to when you service a quartz movement. The weight just isn’t there to give it any feeling of significance. Additionally the plastic, while certainly innovative, makes the watch look a touch cheap. That being said it is still a fantastic piece and watching the escapement through the back, though it does not have the same significance of watching metal move, still remains a mesmerizing site.

While not all innovations (especially those in horology) become standard or successful even if they are indeed an improvement on the status quo it does not diminish the importance of this movement and the research that went into it. This is most certainly a great oddball piece to add to the collection right next to the electrics, electronics, and Accutrons. 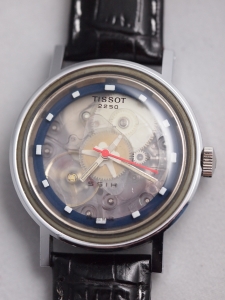