A few months back I wrote about the famous Bulova Accutron and the bitter rivalry between Bulova and Omega. What I love so much about this watch is that it is a piece of historical irony on your wrist. After their bitter rivalry, Omega went on to use the very technology they fought against in the Horological Space Race. It is more or less an Accutron in Omega clothing. If nothing else, it really speaks to the advanced technological feat that Bulova achieved with their tuning fork movements. Omega swallowed their pride and put a Bulova movement in their Chronometers. To be fair it was not technically a Bulova movement but was a movement made by ESA with technology licensed from Bulova. It is in tiny wording on the inside of the case back, but Omega did pay homage to the Accutron movement and its creator in the way any Swiss watch company would (secretly and in a way that most customers wouldn’t know they borrowed the technology from an American company.) 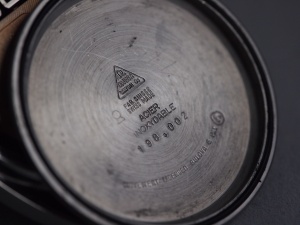 The more detailed story behind the movement in this piece is that in 1970 an ex-Bulova developer named Max Hetzel licensed the tuning for technology from Bulova and improved it to make it more robust and reliable. Nicknamed the Mosaba (Montres Sans Balanciers) the ESA tuning fork movement improved on the positional fix of the tuning forks allowing for little to no deviation in time keeping due to slight positional errors. Additionally, they greatly decreased the length of the index finger (which anyone who has ever worked on an Accutron can tell you is a blessing.) This fragile tendril on an Accutron could easily be knocked out of alignment by a shock making them particularly fragile. 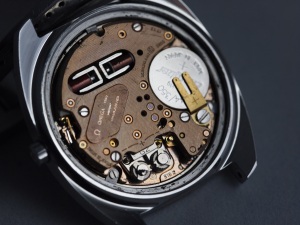 The f300 tuning for Omegas are fantastic pieces that provide the great styling of a 70s Omega with the seductive hum of an Accutron. It’s a perfect watch for someone who wants the innovation of the Accutron with the name of an Omega.

I got this watch in relatively rough external shape and was unsure of its running ability. The gasket was melted, and the crystal was incredibly scratched and unoriginal, but I knew that with enough care it could be a great looking 70s showpiece. That it was on the original band was a huge bonus. I figured that if I could get the right parts and clean it up enough I would have a great complete and original piece.

Sure enough with a cleaning, a genuine Omega crystal, and a fresh battery this chronometer is humming once again. It has a few scratches, but is in unpolished condition, and is a fantastic piece of Constellation history.

A great source for more information about this movement can be found at: http://members.iinet.net.au/~fotoplot/acctechesa.htm 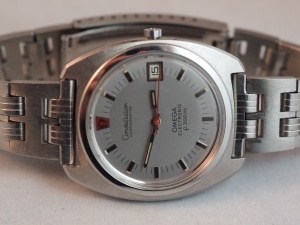