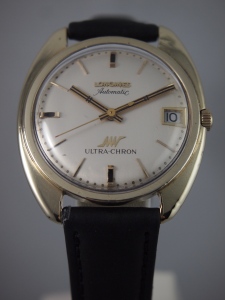 This Longines Ultra-Chron Caliber 431 was a labor of love (which is to say it took an incredibly long time and was more expensive than I had imagined.) The finished product is a wondrous movement famous for its rare and rapid tick.

Once again I got more than I bargained for with buying a watch “As Is” but that is the nature of this work. That being said, I did not expect to see so much damage inflicted upon such a beautiful piece. A perfect storm of sloppy work, laziness, and incorrect parts substituted for proper ones necessitated the tracking down of several major and mostly obsolete parts to get this running properly.  It required new balance jewels, shocks, a new main plate and a whole new calendar mechanism.

The base rate that a watch beats at is 18,000 vibrations per hour (vph.) This means that the watch’s balance completes half of an oscillation 18,000 times per hour or 5 times per second.  The theory behind higher rates is that more beats per second means less rate variation in different positions experienced during daily wear. At the time that the Ultra-Chron was introduced, high-beat watches were at 28,800vph. Then in 1966 Girard Perregaux came out with a watch that beat at 36,000vph or twice as fast as the standard 18,000vph. Longines soon followed in 1967 to mark their 100-year anniversary with their line of Ultra-Chron movements, which also beat at the astonishingly fast 36,000vph.

Such a high beat requires some changes to the gear train. The balance wheel is noticeably smaller than a common one and the escape wheel has 21 teeth instead of the standard 15. Other than those two modifications however the mechanics are identical to any other watch. Additionally, the 36,000vph movements incur additional wear and present more lubrication issues than lower vibration rates. For this reason, the 28,800vph is now much more common among high precision calibers and the 36,000vph movements are seen as a short-lived example of “extreme engineering” in horology.

During their nine years of production Longines produced several caliber variations as well as a near infinite combination of case, dial, and hand designs from the very standard to the more trendy of the time (this piece clearly fits in with the latter.) As can be seen in the ad below, this watch originally came with a mesh metal band, but that was long gone by the time I got my hands on it. Personally I prefer it on leather.

After an exhausting restoration, I am happy to have this beautiful piece done, ticking, and sitting pretty in the “finished” pile. 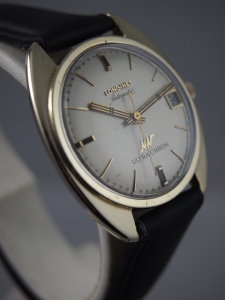 Given that I buy old watches generally in non-working condition, it is incredibly rare that I am shocked in a good way when I get to the movement of a watch. This 1967 Longines was that exception. Once I got the scratched crystal off I saw that the dial was perfect on this watch. Not a speck of dust, a fingerprint, anything. I then got the movement out of the unishell (sometimes this can be a pain) and turned it over to reveal a movement that had not been touched by human hands since it left the production line 46 years ago. It had none of the scratches, dust, dirt, hair, or marks that are all too commonly the sign of human intervention. The case also had no service marks. It was common practice for watchmakers to leave a mark with a tiny engraving on the inside of cases. This watch had been bought, had an ugly stretch band put on it, and was then never worn. It only required a quick disassembly and cleaning to remove the factory oil, some new oil put in, and a slight regulation to get it running just as perfectly as it did all those years ago. Oh, and I also added a new leather band that matches the watch’s elegance far better than a stretchy band.

The caliber 284 is beautiful in its simplicity. It is a relatively wide but slim movement that is incredibly service friendly. I highly recommend this as a good movement to experiment on if you ever feel the itch to get into watch repair.

The dial is somewhat different with hands that are simple but just ever so slightly different from conventional hands in their shape, and the Roman numeral markers at 3,6,9, and 12 are also great touches along with the crosshair.

Usually there are several terms in the watchmaker’s lexicon that I need to use when describing a restore, but in this case only one comes to mind: Near Mint. 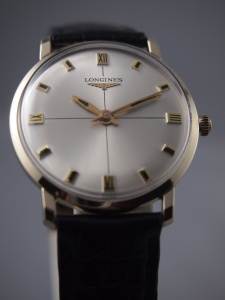 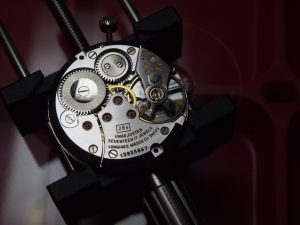 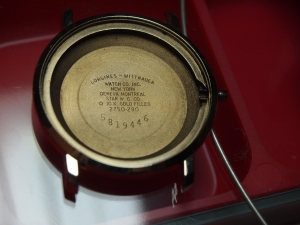